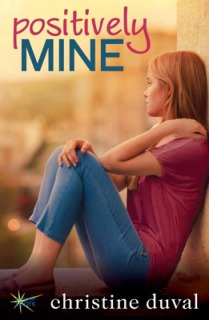 It is four weeks into her freshman year of college, and Laurel’s first test was unexpected. Discovering she’s pregnant isn’t exactly what she had planned for her first semester, and while she intends to tell her emotionally-distant father, being away at school makes it all too easy to hide.

An imperfect heroine plagued by bad choices and isolated during what should be the best time of her life, readers are sure to identify with Laurel as she confronts teen pregnancy, in secret.

Disclaimer: I received a free copy of this book from the author in exchange for an honest review.

Positively Mine is about a young girl, barely into adulthood, who finds herself pregnant during her first year of college. Scared out of her wits, she decides to keep her pregnancy a big secret, from everyone, including from her father, and the baby’s father.

I wasn’t quite sure about how I felt about the book after I finished it, and I’m still not quite sure how I feel about this book now, as I’m writing this. There’s a good story here, but it didn’t make me feel anything. These kinds of books are supposed to be heartbreaking, and move me to tears, but as I read this book; nothing.

The writing and dialogue didn’t necessarily help this–or ruin it, for that matter–because I found it to be rather bland. For example:

“Wow!” Now it’s Mike’s turn to stare out the window. “So you’ve gotten together with me twice all the while knowing you were pregnant with someone else’s kid? That’s bad, Laurel!”

Um, “That’s bad, Laurel!”? Is she an eight year old kid? This is just one example of not-so-great dialogue. The writing itself had its high points, as well as its lows. I enjoyed some philosophical bits, in which the author includes some great uses of literary devices:

As I crest the next hill, I whisper, “What do I do?” The September breeze has no answer for me.

I can’t hold the tears in any longer, and my face is a river. “I’m freaking out!”

Trust your readers a little bit. If Lauren’s “face is a river,” I’m sure most readers can make the connection that she’s “freaking out.”

And speaking of the main character, I was also majorly disappointed by her, who continuously kept choosing to make bad decisions, and then feel sorry for herself afterwards. When the synopsis labels Lauren as an “imperfect heroine plagued by bad choices,” it’s not exaggerated. She would constantly choose the obviously wrong choice, sometimes not even showing the reader a motive as to why. I understand that there are characters who are intentionally written with a ton of flaws, but it doesn’t work if it doesn’t make any sense. I wanted to root for Lauren, but I was not able to scrounge up any empathy towards her.

I don’t see that she grew as character either. When it came to making the important decisions, she made the right choices because she was forced to, not because she realized it was the right thing to do.

Nonetheless, I did want to see how she would turn out and wanted to finish the book. Although I’m not completely in love with this book, I’m hoping the author will have redeemed herself in the next installment of this series, coming out later this month. I would rate this book 2.5/5 stars, and wouldn’t really recommend it.